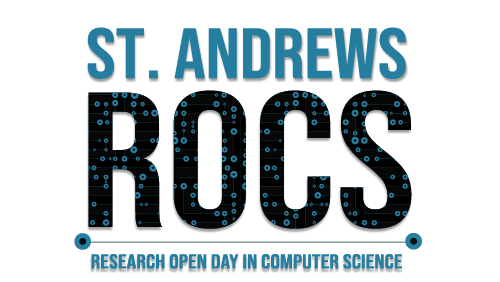 St Andrews ROCS is an event for those of you who engage (or are planning to engage) with research in the School of Computer Science at the University of St Andrews.

The main audiences are prospective postgraduate students, prospective or current industrial collaborators, and colleagues from other disciplines or Schools in Scotland and beyond.

There will be talks from all research groups, posters, demonstrations, guided tours, and much more.

You can learn about how to become a St Andrews PhD student or an active industrial collaborator.

If you have any questions, e-mail dopgr-cs@st-andrews.ac.uk.

The Hut Group develop and manage a proprietary eCommerce platform that handled over half a billion pounds of revenue last year. UX within the company is responsible for optimising user flows through the website, and working with Design departments to deliver user delight. With over 30 distinct site brands internally, and several external clients, the team attempt to strike a balance between optimising sites for revenue and user delight. This talk is about the challenges of UX within a wider business organisation, and the role that Computer Science graduates can play in a multidisciplinary UX team.

Bio:
Elliott joined The Hut Group in June, starting in the Research and Development department. He worked on developing a dashboard for use inside the business, and developed a series of prototypes to show users Social Media content on-site. He now heads the User Experience (UX) department. Prior to joining THG, Elliott worked at Skyscanner as a front-end developer whilst graduating from St Andrews in Computer Science with several modules in HCI.

The School of Computer Science at the University of St Andrews offers funding for up to six students to undertake PhD research starting in the Fall of 2017 in any of the areas of research carried out by its academic faculty (which includes, but is not limited to, Artificial Intelligence and Symbolic Computation, Computer Systems Engineering, Human-Computer Interaction, and Programming Languages).

We are looking for highly motivated research students willing to be part of a diverse and supportive research community.

Applicants must hold a BSc or MSc in an area appropriate for their proposed topic of study (usually Computer Science, but not restricted to it). The Scholarship covers PhD fees and provides a tax-free maintenance stipend of £14,296 per year for 3.5 years. Exceptional students can apply for an additional £2,000 per year. International applications are welcome.

We especially encourage female applicants and underrepresented minorities to apply. Admission is competitive but candidate selection takes into account the motivation, skills and previous experience of the candidates. If you are interested, please get in contact with us by e-mail even if you are not sure of your eligibility or strength as a candidate (write an e-mail to pg-admin-cs@st-andrews.ac.uk Subject: Informal PhD Inquiry). We will facilitate contact with a member of research staff in your area of interest (for a list of existing faculty and areas of research see http://www.cs.st-andrews.ac.uk/prospective-pg/postgraduate-supervisors).

For further information, including the step-by-step procedure on how to apply please check our postgraduate-research web page (http://www.cs.st-andrews.ac.uk/prospective-pg/research-degrees). The closing date for applications is March 31st 2017 and we will make decisions on studentship allocation by April 30th 2017. Before preparing a full application we recommend that you contact us by e-mail at pg-admin-cs@st-andrews.ac.uk.

Building the news search engine, by Ramkumar Aiyengar, Bloomberg
Abstract:
This talk provides an insight into the challenges involved in providing near real-time news search to Bloomberg customers. Our News team is in the process of migrating to using Solr/Lucene as its search and alerting backend. This talk starts with a picture of what’s involved in building such a backend, then delves into what makes up a search engine, and then discusses the challenges of scaling up for low-latency and high-load.
Bio:
Ramkumar leads the News Search backend team at the Bloomberg R&D office in London. He joined Bloomberg from his university in India and has been with the News R&D team for 7 years now. For the last couple of years, his team has focussed on rewriting almost the entire search/alert backend, used by almost every Bloomberg user to get near-real time access to news with sub-second latencies. A geek at heart, he considers himself a Linux evangelist, an open source enthusiast, and one of those weird creatures who believes that Emacs is an operating system and had once got his music player and playlists to be controlled through a library written in Lisp.

Abstract:
Matching problems typically involve assigning agents to commodities, possibly on the basis of ordinal preferences or other metrics. These problems have large-scale applications to centralised matching schemes in many countries and contexts. In this talk I will describe the matching problems featuring in two such schemes in the UK that have involved collaborations between the National Health Service and the University of Glasgow. One of these dealt with the allocation of junior doctors to Scottish hospitals (1999-2012), and the other is concerned with finding kidney exchanges among incompatible donor-patient pairs across the UK (2007-date). In each case I will describe the applications, present the underlying algorithmic problems, outline the computational methods for their solution and give an overview of results arising from real data connected with the matching schemes in recent years.

BIO:
David Manlove is a Senior Lecturer at the School of Computing Science, University of Glasgow, where he has been since 1995. His research interests lie mainly in the field of algorithms and complexity, and include algorithms for matching problems involving preferences. These arise in applications such as the assignment of school leavers to universities, kidney patients to donors and junior doctors to hospitals. He and his colleagues have been involved in collaborations with the NHS in relation to the Scottish Foundation Allocation Scheme (for matching junior doctors to hospitals) and the National Living Donor Kidney Sharing Schemes (for enabling kidney “swaps” between incompatible donor-patient pairs) where optimal matching algorithms developed by him and colleagues have been deployed. He has over 50 publications in this area including his book “Algorithmics of Matching Under Preferences”, published in 2013.

The EM algorithm has been the mainstay for estimation with latent variables, but because it is guaranteed to converge to a local maximum of the likelihood, it is not a consistent estimator. Spectral algorithms, on the other hand, are often shown to be consistent. They are often more computationally efficient than EM.

In this talk, I am interested in presenting two types for spectral algorithms for latent-variable PCFGs, a model widely used in the NLP community for parsing. One algorithm is for consistent estimation of L-PCFGs, and the other is for efficient inference with L-PCFGs (or PCFGs). Both algorithms are based on linear-algebraic formulation of L-PCFGs and PCFGs.

BIO:
Shay Cohen is a Chancellor’s fellow (assistant professor) at the University of Edinburgh (School of Informatics). Before that, he was a postdoctoral research scientist in the Department of Computer Science at Columbia University, and held an NSF/CRA Computing Innovation Fellowship. He received his B.Sc. and M.Sc. from Tel Aviv University in 2000 and 2004, and his Ph.D. from Carnegie Mellon University in 2011. His research interests span a range of topics in natural language processing and machine learning, with a focus on structured prediction. He is especially interested in developing efficient and scalable parsing algorithms as well as learning algorithms for probabilistic grammars.

Abstract: Cloud Computing is revolutionising the delivery of compute services and driving the next generation of web-scale application design. This presents enormous opportunities but also challenges, particularly in heavily regulated sectors such as Financial Services.
Allan Beck, Cloud Platform and Strategy Lead from JPMorgan Chase, will discuss the current approach and challenges to Cloud in Financial Services. This will include an overview of available Cloud services and capabilities, the specific challenges to Cloud in Financial Services (private and public Cloud) and an overview of the next-generation Cloud platform and developer experience at JPMorgan Chase.

Abstract: Good media content has the power to enrich our lives. We focus on non-traditional content other than movies, music and games, conducting comprehensive research on a variety of interactive content which creates new value through interactions with humans. In this talk I will introduce a series of my group’s recent research projects involving technologies for interactive content design and 3D interactions.
Web: http://www.icd.riec.tohoku.ac.jp/index-e.html

Bio: Yoshifumi Kitamura is a Professor at Research Institute of Electrical Communication, Tohoku University. He received the B.Sc., M.Sc. and PhD. degrees in Engineering from Osaka University in 1985, 1987 and 1996, respectively. Prior to Tohoku University, he was an Associate Professor at Graduate School of Engineering and  Graduate School of Information Science and Technology, Osaka University (1997-2010), and before that he was a researcher at ATR Communication Systems Research Laboratories (1992-1996) and Canon Inc. (1987-1992).

Complex networks provide a way of modelling systems with lots of
dependent elements, such as traffic networks or social networks. By
running processes over these networks we can explore how the topology of
the network affects the way the process evolves, and potentially
identify factors that accelerate or impede it. This opens-up
possibilities both for study (science) and control (engineering).

This talk will briefly introduce the mechanics of complex networks and
the processes that run on them, review some recent results we have
obtained, and look to future research programme where we will combine
simulation with sensing to give us new ways of looking at the world.

Feldspar is a domain specific language with the goal of raising the
level of abstraction for performance sensitive, low-level code.
Feldspar is a functional language embedded in Haskell, which offers a
high-level style of programming. The key to generating generating
efficient code from such descriptions is to use a high-level
optimisation technique called vector fusion. Feldspar achieves
vector fusion for free by employing a particular way of embedding the
language in Haskell by combining deep and shallow embeddings.

Bio: Josef Svenningsson is an Assistant Professor in the Functional
Programming group at Chalmers University of Technology. He has a broad
range of interest and has published papers on wide variety of topics,
including: program analysis, constraint solving, security, programming
language design, testing and high-performance computing.