Organised by the UCL Financial Industry Series (UCL FIndS) in partnership with Bank of America Merrill Lynch, J.P. Morgan, The Royal Bank of Scotland, Financial Services Knowledge Transfer Network, SWIFT and Level39 Technology Accelerator at Canary Wharf, the Hackin’ The City Hackathon brought together 55 students from a dozen of top universities in the UK to pit their skills in a round-the-clock hackathon to design and develop an application over 24 hours.

Six students from the university’s Computer Science department (Waqas Arshid, Gordon Coupar, Robert Dixon, Valentin Tunev, Alex Waller and Ben Lovell) were invited to attend the event in London. Five entered as ‘Team StACS’ and Ben as an individual participant with the intent of forming a team.

The aim of their project was to enable the creation and validation of safe buildings that have optimal escape routes in the event of disasters. Through the use of pathfinding algorithms, building floor plans can be analysed and statistics presented. Subsequently through these adjustments, improvements can be made in order to aid safety in the event of an emergency.

On Sunday morning, 12 teams presented their value proposition, technology solution and ran a live demo of their projects. Judges after long deliberation came up with six finalists. By 1530 on Sunday after 25 minutes of intense debate, senior judges The St Andrews team was awarded 3rd place and team members each received Amazon vouchers. 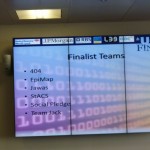 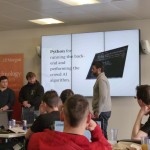 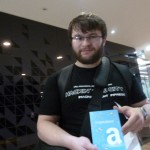 We won a prize