Next Wednesday, October 3rd between 2 and 4pm, Google will be hosting an event at St Andrews. Come along to the Purdie building (Lecture Theatre A) to learn the ins and outs of technical roles at Google. You’ll learn about software and site reliability engineering, product management, and engineering at Google in general. You’ll also get insights into the technical interviewing process, and learn about the internships and scholarships available to students.

Where: Purdie Lecture Theatre A

Register by Oct 1st for the chance to be invited to an technical interview workshop 6-8pm on Oct 3rd. 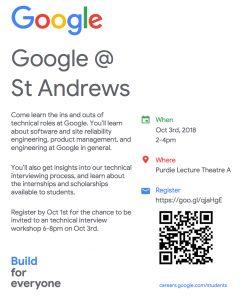 Alumni Paul Dobra will host a short session about Salesforce graduate opportunities on Friday the 8th December, at 11am in Jack Cole 1.33. Target audience MSc, MSci and Honours students.

Following on from a successful visit last year, J.P. Morgan returned to the School of Computer Science last week, to promote tech careers, internships and other student opportunities.

Staff from the company and CS students are pictured viewing project challenges and their solutions highlighted in their technology showcase whilst discussing future career openings and enjoying the complimentary pizza.

J.P. Morgan is a popular destination for our graduates demonstrated by four Alumni (Maria McParland, Nada Kartouch, Conner Somerville and Peter Cockroft) who were part of the team representing the company at the successful event. 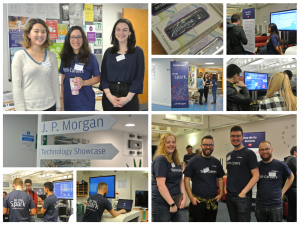 Two internships will be available this summer working with Dharini Balasubramaniam and Uta Hinrichs on developing an interactive teaching resource for learning programming language concepts.

The deadline for applications is Friday 22 April.

Congratulations to second year students Katerina Saranti and Tatiana Matejovicova, both have successfully secured Google STEP Internships with Google, in Zurich. A fantastic achievement given the highly sought after summer engineering projects and the competitive process involved.

Katerina had originally applied for a Google Anita Borg scholarship last year. She had intended Interning at a natural speech recognition company, before being contacted by a student development specialist from Google who encouraged her to apply for a STEP internship.

Katerina shared some of her thoughts on the interview process.

“After the Christmas holidays, a Student Development Specialist at Google emailed me asking me if I would be interested in applying for a STEP internship as my profile from the Anita Borg application seemed a good fit. It took me by surprise but I was thrilled of course and I spent the next few weeks preparing for the technical interviews.

I feel that all CS modules helped me for the interviews, but I found the most relevant module to be CS2001 as it focuses on data structures which are especially important for the interviews. Also crucial to my preparation was solving lots of coding problems by hand, without using an IDE, since during the interview I had to write out everything myself, without the help of auto-complete or the compiler’s complaints about my errors.

I had two technical interviews, I thought my first one went OK and I managed fairly easily to do the coding that I was asked but I was not quite sure about the second. The feedback took about two weeks to come out and after that, things went on rather quickly; a host matching interview was arranged for a project in Zurich and in a matter of hours I received confirmation that I was selected. The big bonus is that my friend and classmate Tatiana was also selected for the exact same project and I can’t think of a better outcome than us working side by side! Special thanks to the careers office who helped me with my CV which was necessary for the scholarship application.”

Thanks to Silvia and Katerina for sharing their experience in an inclusive and informative way, and in doing so encouraging other students to seek out internships.

We have supported a number of student led, or internship focused events in the last year including the Academic Skills Project and look forward to hearing more about the 2016 STEP internships at future events.

Congratulations to first year student Silvia Nepšinská, who has successfully secured a STEP Internship with Google in Zurich. Her success after one semester in computer science is exceptional, given the highly sought after places and competitive process.

Silvia first heard about Google STEP internships from a friend and applied to get real-life programming experience with a company renowned for its creative and varied office environment. She explained her motivation for applying and shared some of her thoughts on the process.

“Thanks to friends who already had internships, and also to the academic skills project talks last semester, I knew what to expect, how the interviews will probably look like. I participated in an algorithmic competition during high school, so I was familiar with the type of questions they would ask, but I have never had a programming interview before, never had to talk while coding, so that was completely new to me. I was really glad when Shyam offered to do a mock interview for me so I could try it.

I had 2 interviews, the first went quite well, but I didn’t know what to think about the second, because the interviewer didn’t talk very much, especially when I got stuck at one point, she mostly waited for me to resolve everything, so I had no idea what she was thinking, which was little scary. But apparently it went well, and they called me just few days later to tell me that I passed the interviews.

But that still wasn’t the end, because in next stage, teams select the successful interview candidates for their projects. It is still possible to get through interviews and not get an internship, because no suitable team/project was found. Last week I received a call from a team in Zurich. We discussed the potential project I would be doing with them and I could ask them whatever I wanted about it, or about the Zurich office in general.

The academic skills project Internship talks were great, because they gave me the information about the process. Also, we had a talk by St Andrews alumni James Smith from Google, and afterwards I signed up for their notifications mailing list. A Google University Programs employee located me from the list, and she talked to me about specifics of STEP internship and future interviews. She was also in contact with my recruiter, so I felt like I had two recruiters, which was really nice.”

The School is keen to highlight student achievement and showcase the talent, originality and creativity fostered here in computer science. Thanks to Silvia for sharing her experience and in doing so, encouraging other students to seek out future internships. We have supported a number of student led, or internship focused events in the last year including the Academic Skills Project, Lost in Translation: Academia to Industry and This is a Google Talk. Adeola Fabola (one of our PhD students) is coordinating the Academic Skills Project (ASP) in the School of Computer Science for the 2015/2016 session. The ASP is a scheme managed by CAPOD, and run by postgraduates, designed to deliver discipline-specific skills and tailored workshops. The slides used during the first workshop are now available, you can also sign up for next week’s workshop and remember if you missed yesterday’s session, you can still benefit from the next events. Thanks to Ade, Shyam and all the panel members for running a great event for the CS student community.