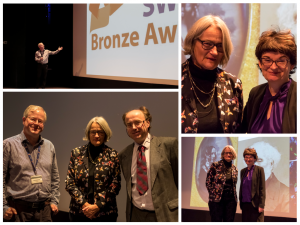 What Every Computer Scientist Should Know About Computer History

Update: Lectures will be live streamed at this link.

Professor Ursula Martin CBE FREng FRSE joined the University of Oxford as Professor of Computer Science in 2014, and is a member of the Mathematical Institute.  She holds an EPSRC Established Career Fellowship, and a Senior Research Fellowship at Wadham College. Her research, initially in algebra, logic and the use of computers to create mathematical proofs, now focuses on wider social and cultural approaches to understanding the success and impact of current and historical computer science research. 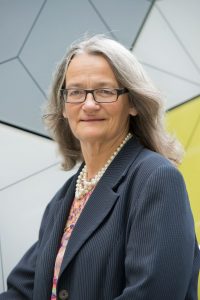 Before joining Oxford she worked at  Queen Mary University of London, where she was Vice-Principal for Science and Engineering (2005-2009), and Director of the impactQM project (2009-2012), an innovative knowledge transfer initiative. She serves on numerous international committees, including the Royal Society’s Diversity Committee and the UK Defence Science Advisory Council.  She worked  at the University of St Andrews from 1992 – 2002, as only its second female professor, and its first in over 50 years. She holds an MA in Mathematics from Cambridge, and a PhD in Mathematics from Warwick.

9.35 Lecture 1:  The early history of computing: Ada Lovelace, Charles Babbage, and the history of programming

2.35 Lecture 3: What do historians of computing do, and why is it  important for computer scientists today

Lecture 1. The early history of computing: Ada Lovelace, Charles Babbage, and the history of programming

IN 1843 Ada Lovelace published a remarkable paper in which she explained  Charles Babbage’s designs for his Analytical Engine. Had it been built, it would have had in principle the same capabilities  as a modern general purpose computer. Lovelace’s paper is famous for its insights into more general questions, as well as for its detailed account of how the machine performed its calculations – illustrated with a large table which is often called, incorrectly, the “first programme”.   I’ll talk about the wider context; why people were interested in computing engines; and some of the other work that was going on at the time, for example Babbage’s remarkable hardware description language. I’ll  look at different explanations for why Babbage’s ideas did not take off, and give a quick overview of what did happen over the next 100 years, before  the invention of the first digital computers.

Getting software right was a theme of programming for the days of Babbage onwards. I’ll look at the work of pioneers Alan Turing and Grace Hopper, and talk about the long interaction of computer science with logic, which has led to better programming languages, new ways to prove programmes correct, and sophisticated mathematical theories of importance in their own right.  I’ll look at the history of the age-old debate about whether computer science needs mathematics to explain its main ideas, or whether practical skills, building things and making things simple for the user are more important.

Lecture 3: What do historians of computing do, and why is it  important for computer scientists today

When people think about computer science, they think about ideas and technologies that are transforming the future – smaller faster smarter connected devices, powered by, AI, and big data – and looking at the past can be seen as a bit of a waste of time. In this lecture I’ll look at what historians do and why it is important; how we get history wrong; and in particular often miss the contribution of of women.  I’ll illustrate my talk with  my own work on Ada Lovelace’s papers, to show how  detailed historical work is needed to debunk popular myths – it is often claimed that Lovelace’s talent was  “poetical science” rather than maths, but I’ve shown that she was a gifted perceptive and knowledgeable mathematician. I’ll explain how the historian’s techniques of getting it right can help us get to grip with  topical problems like “Fake news”, and give us new ways of thinking about the future.

On March 31st, Dr David Manlove from the University of Glasgow, delivered the semester two distinguished lectures in Lower and Upper College Hall. The overall title was algorithms for healthcare-related matching problems.

David started with an overview of complexity theory and solving hard problems. He gave examples of this in practice, for example how researchers constructed a best-possible tour around the best 20,000 pubs in the UK. The second lecture focussed on how to assign junior doctors to hospitals in the best way, a very practical problem but with interesting complexity issues. The final lecture focussed on the life-changing topic of how to set up exchanges of kidneys between healthy donors and patients needing transplants. David talked about how his expertise in algorithms has been translated into regularly finding the best possible matches which then result in real transplants taking place.

David is pictured above at various stages of the distinguished lecture series and outside College Hall with Head of School, Prof Steve Linton, Prof Ian Gent and Dr Ishbel Duncan, 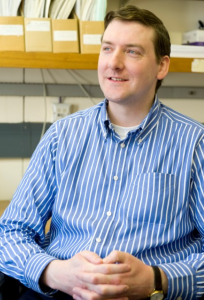 lications – in this series of lectures I will describe how algorithms can be used to solve matching problems having applications in healthcare settings.  I will begin by outlining how algorithms can be designed to cope with computationally hard problems.  I will then describe algorithms developed at the University of Glasgow that have been used by the NHS to solve two particular matching problems.  These problems correspond to the annual assignment of junior doctors to Scottish hospitals, and finding “kidney exchanges” between kidney patients and their incompatible donors in the UK.
END_OF_DOCUMENT_TOKEN_TO_BE_REPLACED

Earlier this month Professor Julie McCann from Imperial College London, delivered the next set of distinguished lectures for 2016, in Lower and Upper College Hall. The three topical, well attended and interesting lectures centred around Distributed Systems and Sensing and discussed how sensor networks are being used today, how other sciences will impact the research area, how such systems are programmed and finished by introducing ongoing challenges in terms of scalability, resilience and security.

Professor McCann is pictured below at various stages of the distinguished lecture series, and with Director of Research, Professor Simon Dobson and Dean of Science, Professor Alan Dearle. The School of Computer Science in the University of St Andrews is pleased to announce the next set of Distinguished Lectures (DLS) leading up to the 50th anniversary of the series in 2019.

The next DLS will be delivered by Maria Klawe the president of Harvey Mudd College and former president of the ACM (Association of Computing Machinery) on Thursday March 31st, location to be confirmed.

The well attended Distinguished Lecture Series were initiated by Professor Jack Cole in 1969 with a view to exposing students and other interested parties to leading edge topics in Computer Science.

All alumni of the school are invited to return and join us in St Andrews for the DLS, and In time we will extend further invitations to the larger 50th Anniversary events in 2019. Earlier this week Professor Joe Armstrong from the KTH Royal Institute of Technology in Stockholm, delivered the second set of distinguished lectures for 2015, in the Byre Theatre. The three topical, well attended and interesting lectures centred around the question “Scalability and fault-tolerance, are they the same?” Slides from the lectures are now available: http://lucacardelli.name/indexTalks.html We define morphisms (mappings) between reaction networks that establish structural connections between them. Some morphisms imply kinetic similarity, and yet their properties can be checked statically on the structure of the networks. In particular we can determine statically that a complex network will emulate a simpler network: it will reproduce its kinetics for all corresponding choices of reaction rates and initial conditions. We use this property to relate the kinetics of many common biological networks of different sizes, also relating them to a fundamental population algorithm. Thus, structural similarity between reaction networks can be revealed by network morphisms, elucidating mechanistic and functional aspects of complex networks in terms of simpler networks.