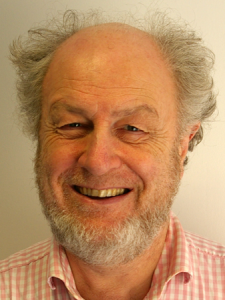 A Service of Thanksgiving was held at St Salvator’s Chapel on Saturday in memory of Roy Dyckhoff who died in hospital in September. The service included a eulogy composed and delivered by Head of School Professor Simon Dobson.

Since his death I’ve been fascinated to hear how others saw Roy — and how their views differed noticeably from what I saw in him. My perception was of a mathematician who’d made his home in computer science, at the computational end of our shared disciplines: someone fascinated by notions of proof as applied to computation, with a far broader and deeper mathematical knowledge than most of his colleagues and an ability to point out links between the practical and the theoretical. But in recent months I’ve learned of many different Roys: the one who moved from topology to category theory in his PhD; the one who worked on proof theory; the one who was a mainstay of computational logic in the UK; the one who rang bells here in our beautiful chapel; who climbed mountains; who studied languages — and probably many others that I’ll learn more of over the course of today.

Roy started at programming early: a one-year job with punched cards before going up to Cambridge as a maths undergraduate. And while doing his degree he spent his second year — when for some reason he had no maths exams — attending all the lectures, tutorials, and seminars for a degree in Persian. (As one does.) Perhaps this should have been a hint there that maths was only ever going to be a part of his intellectual career; or perhaps it was an early signature of an individual with exceptionally wide-ranging interests, who would constantly return to pure maths from lengthy diversions into other subjects. One look at the bookshelves of his house in St Andrews tells you this — volumes on renaissance art, arts and crafts, world history, and early music sitting alongside the algebra and number theory. It’s interesting also to look at theses of his nine PhD students, interesting how many of them sit at interfaces: between proof theory and category theory, between logic and search, between logic programming, functional programming, and type theory.

But such a broad base of interests sat on a bedrock of fascination for precision — indeed, a demand for precision, and an irritation that other people and organisations seemed so unreasonably comfortable with anything less than precise approaches to subjects. We saw this clearly in Roy’s (repeated) attempts to translate some or other aspect of the university’s regulations into first-order logic — an activity with which he persisted in the face of almost complete bafflement on the part of those to whom he addressed his memoranda. “Let S be the set of all students, and consider a set M of modules operated on by a collection of groups G-sub-i such that…” and so on. I’ve sometimes wondered how those on the receiving end felt about this mathematician’s take on their job — or indeed whether Roy himself imagined the university’s administration to be populated entirely by frustrated logicians, trapped in an imprecise world of programme requirements and module anti-requisites, and as anxious as him to re-write the rules with precision.

Given all this, I think it’s hard to assess what Roy’s influence has been, since it’s been spread over so many disparate areas — and that’s probably a good thing. “Activity is the enemy of thought,” as Christopher Strachey once observed, and the attempt to measure and quantify thought isn’t far behind. It’s not bad in itself, but we now know it breeds a narrow specialisation that over-values increasingly deep looks at increasingly tiny areas of knowledge, and systematically under-values those who want, and feel able, to contribute more widely — as Roy did. If there’s anything to take away from his career, I think it would be this, an example of scholarship that is at once broad, deep, intellectually honest, and constantly curious.

For those who’d like to mark his passing in some way, the family have suggested giving blood as a suitable marker. Alternatively, they are collecting for the Scottish Mountain Bothies Association, which was a charity he supported for many years. https://mydonate.bt.com/fundraisers/roydyckhoff