Abstract: In this talk, I will present a case study to illustrate how automated algorithm configuration can be used to gain insights into theoretical results on an evolutionary algorithm, namely the (1+(λ,λ)) Genetic Algorithm. This work is a collaboration with Carola Doerr.

The (1+(λ,λ)) Genetic Algorithm is an evolutionary algorithm that has interesting theoretical properties. It is the first algorithm where the benefit of crossover operator is rigorously proved. It is also the first example where self-adjusting parameter choice is proved to outperform any static parameter choice. However, it is not very well understood how the hyper-parameter settings influences the overall performance of the algorithm. Analyzing such multi-dimensional dependencies precisely is at the edge of what running time analysis can offer. In this work, we make a step forward on this question by presenting an in-depth study of the algorithm’s hyper-parameters using techniques in automated algorithm configuration.

Speaker bio: Dr Nguyen Dang is a post-doc in the Constraint Programming group at the University of St Andrews. Her main research focus is on automated algorithm configuration, algorithm selection and their applications in various contexts. These techniques make use of statistical methods and machine learning for fine-tuning of algorithm parameters, assessing parameters’ importance and building algorithm portfolios. Another line of her research is about solving combinatorial optimisation problems using metaheuristic algorithms.

Research carried out by Charlie Blake and Ian Gent to compute the approximate odds of winning any version of solitaire featured in New Scientist last week (print edition November 23rd ). Ian emphasised the calibre of research carried out by our undergraduate students and his early interaction with card games.

“This research has been hugely satisfying to me because my mother taught me games like King Albert as a child and I loved to play them with her. Now I know for the first time the chance of winning that game is about 68.5%.

It is wonderful to see work which started as an undergraduate student project feature in the New Scientist. This obviously reflects Charlie’s fantastic programming that he did. But it also shows the research-level quality work that undergraduate students can do as part of their studies in St Andrews.”

Roberto has been part of a very cool project in KTH where they used Constraint Programming to solve a number of compiler problems. He is now working for Edinburgh and we invited him to give us a talk about his research in this area. The talk will be 30 minutes + Q&A. Please come along if you are interested.
Date/time: Oct 30th, 11am
Location: JC 1.33b
Title: Constraint-Based Register Allocation and Instruction Scheduling
Presenter: Roberto Castañeda Lozano – School of Informatics, University of Edinburgh
(joint work with Mats Carlsson, Frej Drejhammar, Gabriel Hjort Blindell, and Christian Schulte at RISE SICS and KTH Royal Institute of Technology in Stockholm, Sweden)
Abstract: This talk presents a constraint-based approach to register allocation and instruction scheduling, two central compiler problems. Unlike conventional heuristic algorithms, constraint programming has the potential to solve these problems optimally and to exploit processor-specific features readily. Our approach is the first to leverage this potential in practice by capturing the complete set of register allocation and instruction scheduling subproblems handled by state-of-the-art compilers, scaling to medium-sized problems, and generating executable code. The approach can be used to trade compilation time for code quality beyond the usual compiler optimization levels, explore and exploit processor-specific features, and identify improvement opportunities in conventional compilers.
More information can be found in Roberto’s doctoral dissertation (https://robcasloz.github.io/publications/TRITA-EECS-AVL-2018-48.pdf) and on the project’s website (http://unison-code.github.io).

The Melville Trust for the Care and Cure of Cancer have funded a PGR Studentship relative to the project entitled ‘Detecting high-risk smokers in Primary Care Electronic Health Records: An automatic classification, data extraction and predictive modelling approach’.

Can a user write a good MIP model without understanding linearization? Modelling languages such as AMPL and AIMMS are being extended to support more features, with the goal of making MIP modelling easier. A big step is the incorporation of predicates, such a “cycle” which encapsulate MIP sub-models. This talk explores the impact of such predicates in the MiniZinc modelling language when it is used as a MIP front-end. It reports on the performance of the resulting models, and the features of MiniZinc that make this possible.

Professor Wallace graduated from Oxford University in Mathematics and Philosophy. He worked for the UK computer company ICL for 21 years while completing a Masters degree in Artificial Intelligence at the University of London and a PhD sponsored by ICL at Southampton University. For his PhD, Professor Wallace designed a natural language processing system which ICL turned into a product. He moved to Imperial College in 2002, taking a Chair at Monash University in 2004.

His research interests span different techniques and algorithms for optimisation and their integration and application to solving complex resource planning and scheduling problems. He was a co-founder of the hybrid algorithms research area and is a leader in the research areas of Constraint Programming (CP) and hybrid techniques (CPAIOR). The outcomes of his research in these areas include practical applications in transport optimisation.

He is passionate about modelling and optimisation and the benefits they bring.  His focus both in industry and University has been on application-driven research and development, where industry funding is essential both to ensure research impact and to support sufficient research effort to build software systems that are robust enough for application developers to use.

He led the team that developed the ECLiPSe constraint programming platform, which was bought by Cisco Systems in 2004. Moving to Australia, he worked on a novel hybrid optimisation software platform called G12, and founded the company Opturion to commercialise it.  He also established the Monash-CTI Centre for optimisation in travel, transport and logistics.   He has developed solutions for major companies such as BA, RAC, CFA, and Qantas.  He is currently involved in the Alertness CRC, plant design for Woodside planning, optimisation for Melbourne Water, and work allocation for the Alfred hospital.

Next Monday is the annual St Andrews Bioinformatics workshop in Seminar Room 1, School of Medicine. Some of the presentations are very relevant to Computer Science, and all should be interesting. More information below:

You can register your interest in attending here. 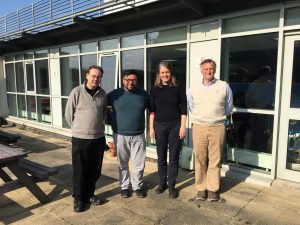 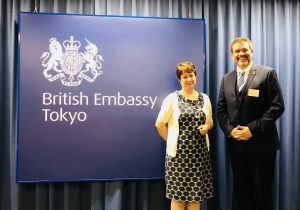 This week Professor Quigley joined a mission to Japan with other academics from the University of Oxford, Edinburgh, UCL and Manchester. The week long event was organised by the UK’s Science and Innovation team in Japan, part of the Foreign and Commonwealth Office. Over five days the delegation visited and presented at seven companies along with three seminars and workshops. Across nine presentations Professor Quigley presented to hundreds of people and introduced some of the Human Computer Interaction research in SACHI, along with research from the AI research group. This mission has the goal to strengthen research collaboration and innovation partnership between the UK and Japan.

During his talks, Aaron provided examples from our engineering doctorate program, our MSc program, work on research interns, PhD students and academics from across Computer Science. 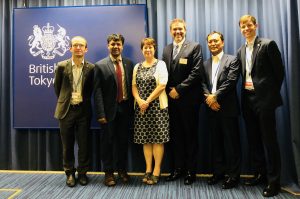 Dr Tom Kelsey will be holding a panel discussion at Computing’s first ever Artificial Intelligence and Machine Learning Live conference on Monday 19th November in London. Through a variety of expert key-notes, end-user case studies, and panel discussions the conference will highlight key developments within AI.

Read more about the conference and programme of events at http://events.computing.co.uk/computingai/programme