Congratulations to our student representatives for 2017/8, elected by their peers last month. Our Reps are integral to the proactive communication channel between staff and the students and also chair and run the Staff-Student Consultative Committee (SSCC) held each semester within the School. 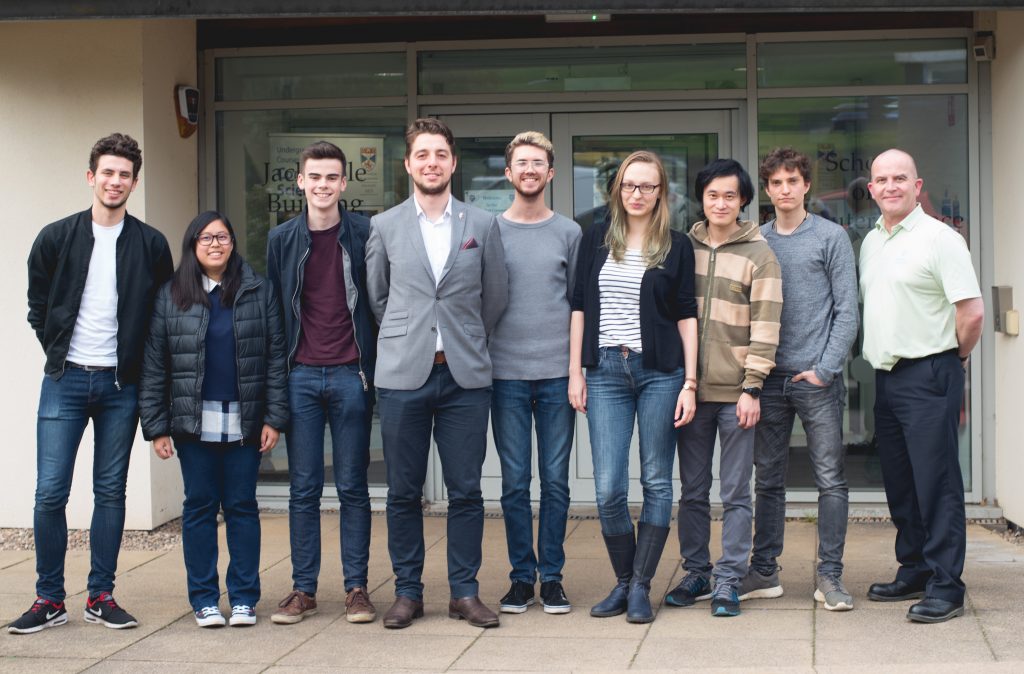 The reps are pictured outside the Jack Cole Building, after this semester’s SSCC meeting and are (from left to right) 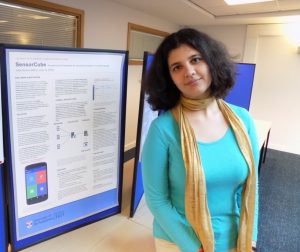 We are delighted to congratulate Iveta Dulova, who attended the 10th BCSWomen  Lovelace Colloquium, and walked away with the prize for “Best Final Year Student”. Iveta’s poster, titled “SensorCube: An end-to-end framework for conducting research via mobile sensing“, was based on her final year project supervised by Dr Juan Ye.

The event was held at Aberystwyth University on April 12, 2017. Also attending from St Andrews were Chloe Collins, competing in the second year category with the poster “Pedal to the metal – the role of technology in transportation” and Laura Brewis with her poster “What percentage of solitaire games are actually winnable?”. 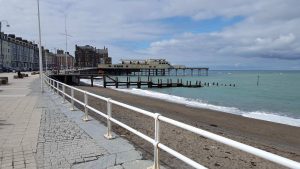 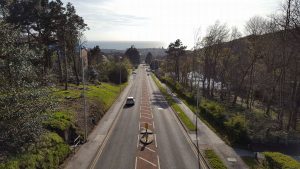 It showed great commitment for these three students to undertake the lengthy trip at a busy time of semester. Like St Andrews, Aberystwyth, is a beautiful small seaside town with an excellent Computer Science department.  Iveta took a couple of photos showing off the beach and the campus. We are delighted to congratulate the student representatives for 2016/7, elected by their peers. Reps play a very important part in the life of the school by providing a healthy communication channel between staff and the students they represent, and also by chairing and running the Staff-Student Consultative Committee, amongst many other roles.

The reps are shown outside the Jack Cole Building in November 2016, and are (from left to right)

Many thanks to the reps for arranging this photo (taken by Alex Bain who can be seen in the reflection), which should help staff and students put faces to the names.

Thanks to everyone who volunteered to be a student rep.

Congratulations to Henry, one of our second year students, who secured a Royal Television Society bursary. The bursary scheme is supported by a cross industry panel with senior representatives from Arqiva, BBC, BT, Channel 4, Fujitsu, Ericsson, Institute of Engineering Technology, ITV, Sky and Youview.

The new venture for the Royal Television Society, is intended to start to address a skills gap and attract some talented young people on top computer science or engineering courses to consider the option of a career in the broadcast industry. Further details of the scheme can be found here: https://rts.org.uk/education-training/technology-bursaries

Bursary recipients attend a two-week summer tour of the industry, spending a day in each of the 10 companies backing the scheme. A financial award per year for the three years of the bursary, membership of the Royal Television Society and mentoring or placements in their final year of study.

As an R.T.S Bursary recipient, Henry explained that he has not only benefited financially; helping towards my course at St Andrews but it has introduced him to career opportunities within the TV industry.

“I have gained a useful insight by participating in a range of activities organised by the RTS. These have really opened my eyes to how Computer Science plays a vital role in broadcasting, which I was previously, unaware of.” Tell us what you think of our videos and you could win a £20 Netflix or Amazon voucher!

You will be asked to watch and assess the video quality of four 1-minute online video clips, as well as complete a short questionnaire related to your regular video usage and your energy-saving awareness and preferences. Your participation should take around 20 to 30 minutes.

Optionally, you will be entered into a prize draw for a £20 Netflix or Amazon voucher.

Congratulations to second year students Katerina Saranti and Tatiana Matejovicova, both have successfully secured Google STEP Internships with Google, in Zurich. A fantastic achievement given the highly sought after summer engineering projects and the competitive process involved.

Katerina had originally applied for a Google Anita Borg scholarship last year. She had intended Interning at a natural speech recognition company, before being contacted by a student development specialist from Google who encouraged her to apply for a STEP internship.

Katerina shared some of her thoughts on the interview process.

“After the Christmas holidays, a Student Development Specialist at Google emailed me asking me if I would be interested in applying for a STEP internship as my profile from the Anita Borg application seemed a good fit. It took me by surprise but I was thrilled of course and I spent the next few weeks preparing for the technical interviews.

I feel that all CS modules helped me for the interviews, but I found the most relevant module to be CS2001 as it focuses on data structures which are especially important for the interviews. Also crucial to my preparation was solving lots of coding problems by hand, without using an IDE, since during the interview I had to write out everything myself, without the help of auto-complete or the compiler’s complaints about my errors.

I had two technical interviews, I thought my first one went OK and I managed fairly easily to do the coding that I was asked but I was not quite sure about the second. The feedback took about two weeks to come out and after that, things went on rather quickly; a host matching interview was arranged for a project in Zurich and in a matter of hours I received confirmation that I was selected. The big bonus is that my friend and classmate Tatiana was also selected for the exact same project and I can’t think of a better outcome than us working side by side! Special thanks to the careers office who helped me with my CV which was necessary for the scholarship application.”

Thanks to Silvia and Katerina for sharing their experience in an inclusive and informative way, and in doing so encouraging other students to seek out internships.

We have supported a number of student led, or internship focused events in the last year including the Academic Skills Project and look forward to hearing more about the 2016 STEP internships at future events.

Building the news search engine, by Ramkumar Aiyengar, Bloomberg
Abstract:
This talk provides an insight into the challenges involved in providing near real-time news search to Bloomberg customers. Our News team is in the process of migrating to using Solr/Lucene as its search and alerting backend. This talk starts with a picture of what’s involved in building such a backend, then delves into what makes up a search engine, and then discusses the challenges of scaling up for low-latency and high-load.
Bio:
Ramkumar leads the News Search backend team at the Bloomberg R&D office in London. He joined Bloomberg from his university in India and has been with the News R&D team for 7 years now. For the last couple of years, his team has focussed on rewriting almost the entire search/alert backend, used by almost every Bloomberg user to get near-real time access to news with sub-second latencies. A geek at heart, he considers himself a Linux evangelist, an open source enthusiast, and one of those weird creatures who believes that Emacs is an operating system and had once got his music player and playlists to be controlled through a library written in Lisp. Life in the Comp Sci Labs

The MSc lab in the John Honey building was busy with IT students holding initial group work meetings, for their next assignment. The advanced network students were networking, in a virtual sense, using WI-FI island.

Yemliha and Umer looked occupied in the HCI lab. A number of 3rd and 4th year students were busy with Project work in The Honours lab. Alas Davie and Jim were busy elsewhere.

Attendance in the 1st and 2nd year sub-honours lab, in the Jack Cole building, could be indicative of an imminent deadline. Modelling of various persuasions appeared to be the focus. 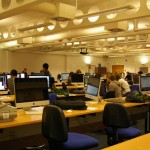 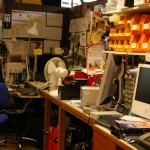 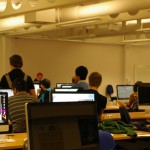 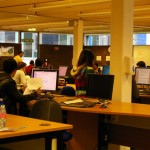 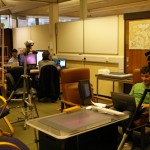 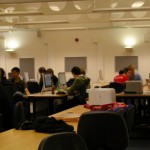 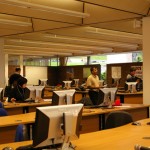 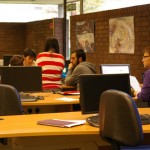 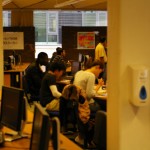 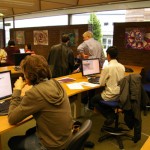 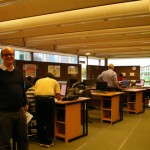 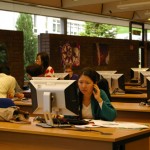 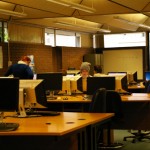 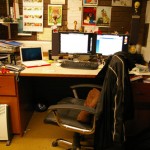 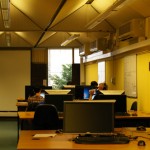 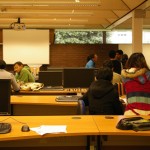